Hi everyone.  Can you believe it’s only a week until my book, Harry the Wonder Cat: The Legend of the Pink Diamond , which introduces me and some of the people of Harrot Reef, comes out? You can preorder it at a discounted price on Amazon for this week only.

Now that the big announcement is out of the way, I wanted to take you on a brief tour of the Cat Kingdom.

You need to know that no one actually knows where the Cat Kingdom is. To get there, you need to be escorted by an official messenger of the Cat King.  You simple touch his back, close your eyes and when the official tells you, open them to a brand new world.

The first thing your senses will take in is the scent.  It’s unlike any other you have known in the human realm of existence.   It’s indescribable really, but if one were to try, it’s a cross of cotton candy, chocolate, and the sweet smell of jasmine.

Then you will notice the glitter everywhere, on the ground, statues of regal cats, even the castle itself.  The sky is raining down these sparkly, golden pieces of tiny substance nonstop, night and day. The next thing you may notice is the sound of sweet, melodious music.  This music has never been heard before and won’t be heard outside of the kingdom. If you are a special guest of the king, you can look up to the sky and see a rainbow shoot an arc over the castle.

Speaking of the castle, it has a gatehouse where two cat guards stand tall to greet you into the castle grounds.  The courtyard is expansive.  It, too, is covered in golden glitter that sparkled in the sunshine.  The colors of the rainbow are brighter than colors are in the human realm. At the castle door there are two more cats to greet you.

Once inside you will find yourself in a great hall surrounded by portraits of the most regal cats that ruled the kingdom hanging on the walls.  At the end of the hall is an extraordinary room with a golden, bejeweled throne in it and a red carpet leading up to it.  This is, of course, where you will find the king.

Well, that’s it.  The Cat Kingdom in a nutshell.  Next week, I’ll give you a tour of Harrot Reef, where I live.  In the meantime don’t forget to preorder your discounted copy of Harry the Wonder Cat: The Legend of the Pink Diamond.

Harry here! I wanted to take this time to introduce you to the most important cat in my life…Sir Aslan, otherwise know as my grandfather. Come on out here grandfather.

Sir Aslan:  How are you, Harry my boy?

Sir Aslan:  *taps Harry on his head* Get up.  Today I speak to you as your grandfather and not as a knight.

Harry:  *straightens up and clears his throat* Yes Grandfather.  Well, I’m sure that my audience would like to know a little bit about you.

Sir Aslan:  *sighs* Well, as you know, I saved the Cat Princess from drowning.  The Cat King was so appreciative that he granted me a knighthood.

Harry:  How long has it been since you became a knight?

Sir Aslan:  *looks to the heavens obviously thinking* Well, it must be about seven…no eight centuries now.

Harry:  Wow! *shakes his heads in amazement*  One final question.  What was your proudest moment?

Sir Aslan:  *beams* That’s easy, Harry.  The moment I that you became a knight, too!

Harry:  *blushes and bows his head in embarrassment* Thank you, Grandfather.

Harry: *sighs as he watches the Great Sir Aslan retreat in silence*  Well, there you have it, my grandfather, Sir Aslan.  Read about him and the rest of the magnificent cats and their humans in Harry the Wonder Cat: The Legend of the Pink Diamond .  Preorder yours now at Amazon.

Harry:  Next week, please join us for a tour of the Cat Kingdom.

As I promised last week, I am going to give you a peek at my home life in Harrot Reef Manor.  The manor house is a huge yellow Victorian with white gingerbread.  It has hardwood floors in some rooms that are so slippery that, if I run fast enough and then lean just right, I can slide right into the next room.  I love this game because it makes my charge, Nikki, and our roommate, Heather, laugh.

The most important cupboard in the house is the “The Magic Cupboard”.  This is where my food and treats are kept.   All I have to do is sit in front of it and stare at Nikki, and she will feed me.  Of course, if that doesn’t work I can always use my magical powers (as long as nobody’s around)!

In the afternoon, Heather gets my brush out and calls, “Brush, Harry, brush”.  I know then that she will brush my long, luxurious fur and I will trill and purr.  When she is done I head-butt her hand and rub my cheek against hers.

I  can hardly wait until after dinner when I hear Nikki pick up the latest Agatha Christie mystery that we are reading together. She calls me to the living room where we share the purple chair that is soft and cuddly. The crackling of the fire in the fireplace is soothing as I listen intently to the sound of Nikki’s voice reading just for me.

Well, that’s an average day in my life at Harrot Reef Manor.  I hope that you’ll come to visit us soon.

Next week:  Please join us for an interview with Sir Aslan, Harry’s grandfather.

Don’t forget to order your copy of Harry the Wonder Cat: The Legend of the Pink Diamond.

Hi there! This is Harry coming to you from the top of The Fence.  The final cat character from the first book of the Harry the Wonder Cat series is the fastest cat in town…Dewey!  Come on out here, Dewey.

Harry:  *smiles* Just fine, Dewey, and I see your still living in the fast lane.

Dewey:  It’s the only way to live!

Harry:  Speaking of living, thanks again for your help in the last mission.

Dewey:  Sure, anytime Harry, you know that!

Harry:  Just a couple of questions.

Harry:  You being the fastest cat, it was only right that I used you as the runner in the case.  How do you keep in shape?

Dewey:  Well, that’s easy…a lot of calisthenics and walks on the docks.

Harry:  I can see the calisthenics, but what do walks on the docks do for you?

Dewey:  *licks his chops* Why, all the fish I can eat, of course!

Harry:  *lets out a deep laugh*  Of course!       *clears his throats and waits for Dewey to stop laughing at his own joke*       Do you have another mission planned?

Dewey:  *shrugs his shoulders*  Well, right now I have a date with a salmon.  Excuse me.  *dashes towards the docks*

Well okay then.  There you have it.  My three pals who co-star in Harry the Wonder Cat: The Legend of the Pink Diamond, which you can preorder  on Amazon now.

Next week, it’s an exciting day at home with yours truly. 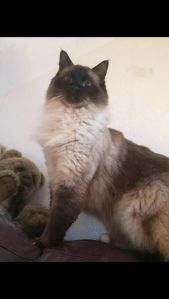 Hi everyone!  Harry here.  Today we have the big guy and my good friend, Ollie.  Now Ollie is one cool cat, as you’ll soon see.  So, without further ado, here’s Ollie!

Harry:  Anytime, Ollie.  So, my burning question to you is this: what was the hardest thing about this mission?

Ollie:  I would have to say trying to get away from my guardians.

Ollie:  They want to keep me caged up.  They say it’s for my own good.  So they keep fixing my hole in the screen.  Every time I get it big enough for me to fit through, they fix the dang thing.  * through clenched teeth* Talk about frustration.

Harry:  Yeah, I can certainly see where that would cramp your style.  *shook his massive head vigorously*   Now that the case is over, what are you going to do?

Ollie:  Oh, you know me.  I’ll probably spend more time allowing my guardians to make over me.  I especially like when they pet my tummy.

Ollie:  *looks suspiciously at Harry*.  Excuse me?  Did you say something?

Harry:  Why no.  You must be hearing things. *clears his throat*  I want to thank you for being with us this week.

Ollie:  *shakes Harry’s paw*  My pleasure.  What do you say…next Saturday night at The Fence?

Harry:  Sounds good.  We’ll get the whole gang together.

That’s all for this week, folks.  Don’t forget to see Ollie and the others in Harry the Wonder Cat: The Legend of the Pink Diamond starring yours truly.   Next week, our guest will be Dewey, the fastest cat on the block.